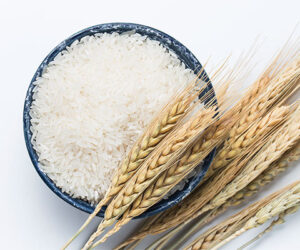 Rice fortification has been an under-utilized opportunity. Technologies that have been used cost-effectively for nearly a century in wheat and maize milling could not be adapted to rice milling. Rice fortification is complex.

Rice is a staple food for half the world’s population, and can contribute as much as 70 percent of daily energy intake, particularly in developing countries. Places where rice is an important contributor to the diet often happen to overlap with areas where micronutrient deficiencies are most common. Here lies an enormous opportunity. Fortifying rice has great potential to help fight hidden hunger on a large scale.

Rice fortified with the fortificant mix by dusting; or coated or extruded fortified kernels mixed with non-fortified rice in a ratio varying between 0.5%-2% is fortified rice. Rice fortification is a cost effective, culturally appropriate strategy to address micronutrient deficiency in countries with high per capita rice consumption. India is a leading rice producing country, with 22% of the total global rice production and 65% of India’s population consumes rice on a daily basis. The per capita rice consumption in India is 6.8 kilogram per month. Fortification of rice makes it more nutritious by adding vitamins and minerals, many of which are lost during the milling and polishing process.

Rice can be fortified using dusting, coating or extrusion technology. Extrusion is the preferred technology for rice fortification given the stability of micronutrients in the rice kernels across processing, storage, washing and cooking, also in view of cost considerations.

In extrusion technology, milled rice is pulverized and mixed with a premix containing vitamins and minerals. Fortified rice kernels (FRK) are produced from this mixture using an extruder machine. The kernels resemble rice grains. FRK is added to non-fortified rice in ratio ranging from 1:50 to 1: 200 resulting in fortified rice nearly identical to traditional rice in aroma, taste, and texture. It is then distributed for regular consumption.